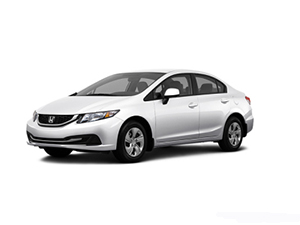 When it comes to the small sedan market, many Mid-Michigan drivers mysteriously feel a bit safer in larger vehicles, and while this is probably due to a crossover like the CR-V or an SUV like the Pilot feeling as though they give the driver more control on the road, the fact is that the 2013 Honda Civic is one of the safest options available to drivers. It even has the awards to prove it.

A New Standard for Safety

With the 2013 model year came a new test for safety from the Insurance Institute for Highway Safety. Rather than “Top Safety Pick,” an award that many Honda vehicles have won for years, the IIHS’s new top rating is “Top Safety Pick+” with some of the very first awards going out to Honda models. In fact, the sporty and stylish 2013 Civic was the first vehicle in its class to receive the coveted award.

The trophies don’t stop there, however. The National Highway Traffic Safety Administration (NHTSA) granted the sedan model of the 2013 Civic their Five-Star Overall Safety award. Both of these awards highlighted the modern safety features of the vehicle as well as the ways in which it performed in crash tests examining frontal offset, side impact, rollover testing, and more.

Of special note is a new standard safety feature on the 2013 lineup: a rearview camera. While this nice technology perk is not in the same class as an airbag or a seatbelt, its inclusion is designed to make the driver more comfortable backing up and parking their new Civic.

That’s not the only new feature on the 2013 Honda models that’s improving safety, either. Honda noticed just how much demand there is for drivers to be connected to their phones at all times, and rather than risk the dangers of talking or texting while driving, they have found a way to seamlessly integrate the driver’s phone with the vehicle through Bluetooth. Even better, through Honda’s i-MID, it’s all controllable from the steering wheel, letting drivers keep their hands on the wheel and their eyes on the road.

Discover a New Definition of Standard and Safety

The new Honda lineup is pushing drivers and automakers to rethink what it is that people should expect in a vehicle. Check out a 2013 Honda Civic for yourself at a Mid-Michigan Honda dealer.