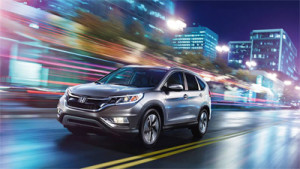 If you’re planning to lease a vehicle, a phrase you should become quickly familiar with is “residual value,” as a car’s residual value has a significant impact on your lease terms.

If you’re in the market to lease an SUV, the impressive 2016 Honda CR-V’s residual value defeats many of its competitors.

Keep reading, and we’ll discuss the role residual value plays in your automotive lease as well as how the CR-V’s residual value stacks up against that of its rivals.

So, first, some information about residual value.

In terms of a vehicle lease, the residual value is how much value an automobile will retain by the end of the lease term, or how much value is left over after the car has been driven during the specified lease period.

For instance, if a vehicle’s sticker price as it sat new at the dealership was $30,000, and it is anticipated that the vehicle will lose $10,000 in value over the course of a 60-month lease period, then the $20,000 of value that remains at the end of the lease is the residual value.

Residual value factors in directly to how much your monthly lease payment will be.

Continuing the example, if your vehicle is estimated to lose $10,000 in value during a 60-month lease, then your monthly lease payment will typically be arrived at by dividing that lost value by the number of months you’ll be leasing the car. In this example, the monthly payment would be determined by dividing $10,000 in value lost by 60 months of lease time: $10,000 divided by 60 equals a $167 monthly payment. Bear in mind, this number doesn’t factor in your down payment, taxes, fees, etc.

Residual value additionally affects the final purchase price of your leased vehicle if you choose to buy it when the lease has ended.

So, in essence, when a driver leases a car, he is paying for the value depreciation that will occur while he drives it—in this case, approximately $10,000.

How the CR-V Measures Up

When it comes to residual value, ALG estimates that the 2016 CR-V will retain 46% of its original value at the conclusion of a 60-month lease.

In comparison, here is how some of the CR-V’s top competitors weigh in when it comes to residual value:

Time to Get Behind the Wheel

As you can see, the 2016 Honda CR-V deftly defeats the competition when it comes to value retention. But the CR-V has even more to offer in addition to its superior residual value.

Drivers can explore the CR-V’s many other outstanding assets at any Mid-Michigan Honda Dealers location. Stop by any of our associated dealerships or contact us today to take the impressive CR-V for a test drive.