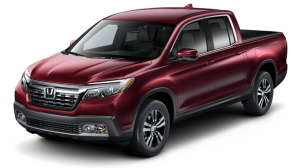 The incredible Honda Ridgeline has, for the second time in its history as a nameplate, received the prestigious North American Truck of the Year award.

The 2017 Honda Ridgeline’s various unique and pioneering features made it stand out from the competition and catch the attention and admiration of the judges, securing the win.

About the Game-Changing Ridgeline

Launched on the market in June 2016, the 2017 Honda Ridgeline has been touted as the ultimate tailgating truck, boasting a variety of amenities to make it the life of any outdoor party.

The remarkable Ridgeline brings various features to the road that have never before existed on a pickup truck. Included among these, the Ridgeline features the world’s first in-bed trunk, which comes standard and offers 7.3 cubic feet of trunk space integrated into the truck bed floor and a drain plug that lets it double as an ice chest.

Additionally, the Ridgeline RTL-E trim includes the automotive industry’s very first truck-bed audio system. This innovative sound system delivers 540 watts of power and features six exciters integrated into the truck bed wall as well as Bluetooth connectivity for easy controllability via a smartphone or other device.

The exceptional 2017 Ridgeline has achieved another impressive first, as well; it is the very first pickup truck to ever earn a Top Safety Pick+ designation from the Insurance Institute for Highway Safety. Being named a Top Safety Pick+ vehicle recognizes an automobile’s exceptional performance in crash tests.

Drivers can check out the award-winning 2017 Honda Ridgeline’s pioneering offerings in person at any Mid-Michigan Honda Dealers location. Stop in and visit the crew at any of our associated dealerships to learn more about the Ridgeline and to take this game-changing pickup truck out on the road for a test drive!